“The Cross stands while the world turns”     …as the old Carthusian motto reads.  A most fitting  epithet to adorn the article I found at Rorate Caeli today.  I’m glad to hear someone else express their disdain for CRUX writer and liberal rump-swab Austen Ivereigh.

I’m quite disturbed by the cuddling up between CRUX and the Knights of Columbus.   As a Past Grand Knight to a local KOC council, I am getting a rash as I ponder this and remember how Carl Anderson’s regime disallowed us to speak to local Democrat “catholic” politicians who clearly needed to be roasted in the public square as heretics (O! for the days of yore!)   …or at least catapulted from the council rolls of the KOC!  But, I digress…that’s for another day!

I bring this to you from the good folks at Rorate Caeli:

Adultery and Communion: The Church is not a “train” 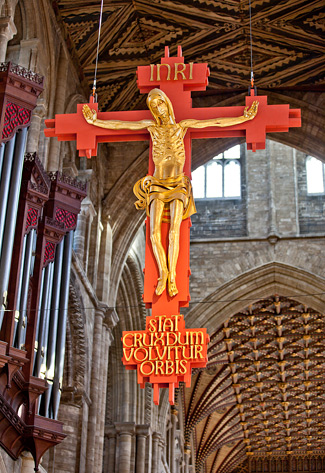 Professional liberal sycophant Austen Ivereigh penned an article for the Knights of Columbus’ website “Crux“, criticizing those who know that the Church cannot change her doctrine established by Our Lord Jesus Christ on Marriage, Penance, and Eucharistic Communion. In the article, he makes repeated use of this metaphor:

“…the train has left the station, the Church is moving on…”

That, of course, is a ludicrous metaphor which makes no sense whatsoever.
The Church, in moments of crisis, when others “move on”, doubles down in defense of her unchanging Truth, the Truth given to her by Christ to be protected: in the “Reformation”, the north of Europe “moved on”, and the only possible response the Church could give (and that gave her enormous vigor) was the reaffirmation of all doctrines and practices contested by the Protestants — including on what is necessary for Eucharistic Communion.
It is to be found in canon XI of the Decree on the Most Holy Sacrament of the 13th Session of the Council:

CANON XI.-If any one saith, that faith alone is a sufficient preparation for receiving the sacrament of the most holy Eucharist; let him be anathema. And for fear lest so great a sacrament may be received unworthily, and so unto death and condemnation, this holy Synod ordains and declares, that sacramental confession, when a confessor may be had, is of necessity to be made beforehand, by those whose conscience is burdened with mortal sin, how contrite even soever they may think themselves. But if any one shall presume to teach, preach, or obstinately to assert, or even in public disputation to defend the contrary, he shall be thereupon excommunicated.

Quite right: a continued state of adultery or fornicatory cohabitation with no prospect of penance and stopping the sinful situation is not a sufficient preparation for Eucharistic communion. It will never be so.

The Church is not a “train” and she will never “move on”: